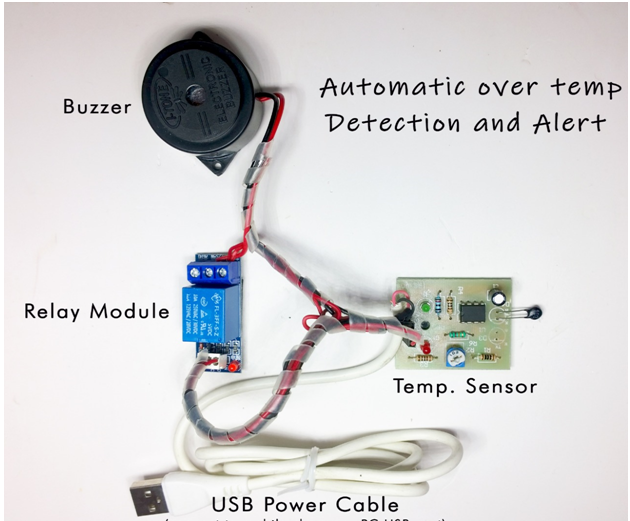 Buy Online “Automatic Over Temperature Detection and Alert”, Ready Kit, 100% Tested from below and get fastest delivery in India www.smartxprokits.in/minikit/ Complete working video can be seen from https://youtu.be/fLxtzQto6hw Follow us on Instagram https://www.instagram.com/smartx2dx/

Application of the circuit:

Most of the NTC based circuits available in market use one or another kind of NTC which increases the cost and also require complicated circuitry around it. But this NTC based circuit uses readily available NTC as light detector. The functioning of this Automatic Over Temperature Detection and Alert  circuit is to detect temperature and automatically activate the LED and buzzer with increase in temperature. LED glows and buzzer sound continuously indicating the increase in temperature of NTC.

Why this particular circuit:

NTC used here as a temperature detector. The variation in temperature wanted can be easily done placing solder gun near to NTC. The circuit operates normally over a DC voltage of 5V which can be obtained by DC supply cable.

The basic idea behind the circuit operation is to turn ON LED and buzzer when there is temperature rise. The NTC is needed for this purpose. NTC is thermistor.  It is heat sensitive resistor element of which resistor value rapidly decreases with increase in temperature. Here, Automatic Over Temperature Detection and Alert circuit works as temperature detector while NTC working as temperature sensor that glows LED and turn ON the buzzer. IC LM393 is used as comparator. NTC output is connected as input to comparator.  Pin no. 4 of LM393 is pulled towards ground. Relay is used as a switch. When relay is activated, normally closed contact becomes open and normally open contact becomes closed. In normal condition, NTC temperature is low and LED and buzzer stays off. Now consider second scenario when temperature rises, the LED glows and buzzer turns ON.

First of all read the given manual thoroughly and study the circuit given in the figure. Also have look at PCB and components supplied along with the kit. Each component has to be soldered in its position on PCB.

Identification of resistors is done by color coding. The color band on each resistor corresponds to its exact value.

There are different methods in which values are defined on capacitors. But usually values are specified numerically on them.

Can you make out the whole working of circuit and are you able to identify each component separately as to where each of them has to be placed?

If yes only then proceed further to actually mounting and soldering the parts.

Not ICs but their sockets are to be soldered on PCB. This is to make mounting and dismounting of ICs easy while troubleshooting.

Start from left most corner of PCB and solder the components one by one on their correct position on PCB.

Before soldering any component see that you have placed it at its right position and with correct polarity. Give due attention to diodes and electrolytic capacitors as they are polarity dependent.

Do the soldering of other components in the same way while keeping in mind that components with long and sensitive leads like capacitors and transistors are soldered last.

After assembling and soldering of components on PCB, connect external DC power source of 5V.

Now set the desired intensity at which you want detection of light. This can be done by changing the resistive value of R2 variable resistor.

Install the unit at ceiling of room.

The only IC used here is LM393

It is dual differential comparator IC.

This 8 pin IC is popular and commonly used IC 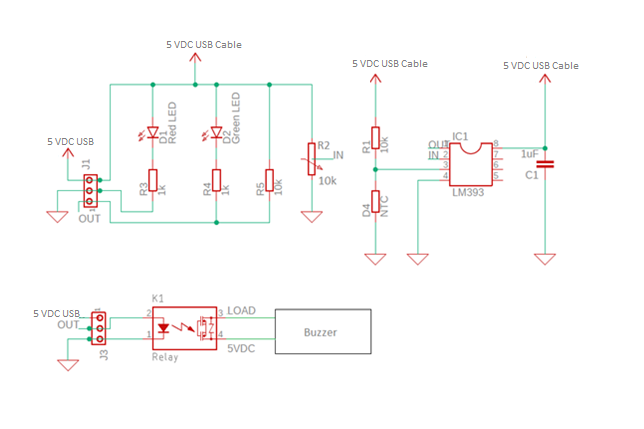